Grandpa, Keo Yim, he is 71 years old and he is a farmer. During Khmer Rouge, he lived at Aural and after that he moved to this village.  He has lived in Chrak Porpoul village for about 20 years now and he noticed that in this village, people have healthy living with producing crops, business and family ability. People don’t seem to face many problems but a long time ago, there was a storm which has destroyed some of the people houses, but fortunately, there wasn’t any accident to people. He also said that there​ still some gangsters in the village, but they still be able to change them into a good person back. For the education field, most of the children could go to school and their parents also encourage their kids to go to school, too. However, there still some kids that they stop study and go to work in the factory. Now, the number of people that working in the factories is more than doing farm because there are more and more factories are made. He has mentioned that, this village has created since the beginning of 1980 after khmer rouge. Before in village, there are full of forest and trees with many different kinds of wildlife such as boar, reindeer, gaur and reindeer. From one year to one year, there are a lot of deforestation happening the forest and trees were starting to disappear. Before, in this village most of the people are climbing palm trees and to make palm sugar. In conclusion, he has some suggestion to the next generation to study hard and don’t do what the society don’t want you to do. 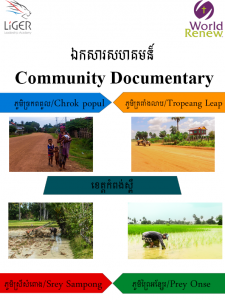 This photo album was created by students from the Liger Leadership Academy and World Renew. We interviewed people in four different villages, such as, Srey Sompong village in Ktom Krang commune, Somraong Tong district and Tropeang Leap village, Chrok Popul village and Prey Onse village which is in Chompu Prek commune, Oudong district in Kampong Speu province. We hope that this photo book will be a resource for the four villages as documentation. We the creators welcome any suggestions from the reader to make this photo book better.

Grandma Brak Hin is 69 years old. She lives in Trapang Leap. Because of old, she can’t go to work so she stays at home to look after the children. She has only one son and this village is not her birthplace. She born in Toul village and then she comes to live in this village for 30 years. She said in this village people are growing rice, feeding the animal and working in a factory. But still, people that go to work in the factory is least then people that grow rice. For growing rice, people can only grow once a year. People grow two types of rice. One is Kondal rice and another one is Measlaet. For this few years, there are some organizations that come and tech the village about planting vegetable, clean water, and health.

Grandma Om Ly is 74 years old. she is a monk in Chompupreak pagoda. She has 8 children. Before she lived in Toul village but the Khmer Rouge took her to live in Chrok Porpoul village. Since she comes to live in this village, everything has changed.  Right now there is a lot of development like electricity and all the stuff that people use are new. She never stays home because she lives depending on pagoda and Buddhist and she always cooks the food and eats the food with other monks. She becomes a monk because her husband was passed away so that’s why she decided to be a monk and walk the road with Buddhist.

Her name is Nang. She lives in Srey Sompong village. She is 56 years old and she stays home with her children every day. There is some problem in her village like there has been a drought for a long time and some of the Gangsters people. She said that in her village people mostly plant the green vegetable. She has one son that is still learning he is 10 years old. And she also said that there is some development in this village such as electricity, clean water, rode, etc. And she takes her green vegetables to sell in the market. Also, She learns how to plant a vegetable from the organization called World Renew.

Her name is Choc Sokun. She is 52 years old and she lives in Srey Sompong village, Chom commune Samrong Tong district, Kampong Speu province. She is a farmer and she came to live in Srey Sompong village when she was 25 years old. She has six members in her family. She has two sons and two daughters. All of her sons and daughters go to work in factory call AMK. Farming has a lot of problems. In that village people mostly go to work at the factories and climbing palm trees but now the people don’t climb any palm trees because, in this season, it isn’t the season to climb. If you climb in this season, it may dangerous because of the storm.

Uncle SokLy, He lives in Phnom Srouch in Kompong Speu province. He is a staff of an organization which called Orida, that helps to develop the rural to a wonderful area in Kampong Speu. He told us a lot about his organization has done to the communities. Orida helps two communes in Kampong Speu province, which helps to dig the pond which can be the water system for the people, toilets, bins, Teaching about the agriculture and skills of doing products. Orida teaches both young and old people and provides a lot of money for the community. We also talked about an achievement of this organization in Prey Ansae village. It was about a pond that gives such great advantages to all the people. This pond is three meters deep, 40 meters in width and 60 meters in length. This pond located at the back of the people house. This pond was made in 2013 with a big providing money from the organization. There is a fence around the pond to protect from dangerous. The people can’t take their cow to take shower in the water. There are many advantages of this pond for the villagers, they take the water to take shower, drink and cook.  This pond is never dry and the people could use it throughout the year. The water is clean with a beautiful view around this pond.

Grandma Rith is 64 years old. She is one of the best farmers in Prey Ansae village. Every day she grows many many types of vegetable, making brooms for sale and feed the animals. She started to grow vegetables when she was 50 years old until now. She learned how to grow the vegetable because of an organization that comes and teaches all over the province. Grandma Rith and her husband have the farm near the small pond so it easy for them to get water and it can supply all over the farm. She lives in a farm with her husband. Her farm was far away from the village and she said living in the quiet place with nature is comfortable. Her life is depending on her farm because she is old and this is the only job she can do to help her family. She takes all the vegetable to sell at the market to get money.